It's been a year or so that I was not able to update my post here and  I thought that the issue on the RH bill was over and ready for implementation but I was wrong. Today, I was greeted by the news that there's a renewed debate on RH bill at the Supreme Court.

I was so upset by the remark of one former lawmaker on his television interview
describing RH Bill to be likened to that of a genocide. And I wonder how he was able to make those conclusions by saying those irresponsible remarks. When I seek Google on the meaning of genocide I found out that the word means-'the deliberate killing of a large group of people, esp. those of a particular ethnic group or nation.' I really don't know what goes into the mind of that lawmaker as he compared RH bill to that of a genocide which to me is very far fetched.

In his opening statement, former Senator Francisco Tatad expressed his fear that Republic Act 10354 would"rewrite the mandate of the Constitution by imposing population control to state-mandated contraception." He added that under the RH bill, couples are only given the options of periodic continence and contraception. "They cannot choose not to choose between the two methods. They must practice birth control or suffer the consequences," he further said.

The former lawmaker insisted that the law does not equally protect the lives of mothers and their unborn children. "That is simply putting family, its most intimate and private life, and their liberties under state supervision," he stated. 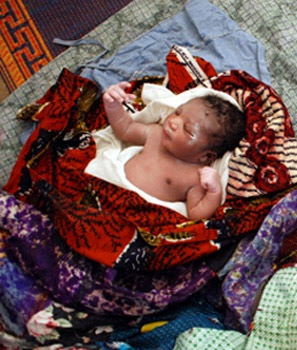 Another newborn infant was left forsaken by its mother for unknown reasons. This time, the incident happened in Winkongo, near Bolgatanga, the Upper East Regional Capital of Ghana, where the two week old child was discovered under a bridge. Fortunately, the baby was safe as it was protected and cared by a local farm dog until they were both found by searchers.


Officials say the two were found together many hours after the pooch went missing. A search party was then formed to look for the dog, but not the baby, when the dog's worried owner got concerned that her pet had not returned home in the evening. Several searchers spent most of the night tracking the hound through nearby fields and woods in pursuit of the wandering canine, but it was not until early morning that they finally located him under the bridge near the farm he calls home. But the searchers were surprised to find the dog curled around a human infant.

A story like this really breaks my heart and that is one of the reason why I made a chart a couple of years ago to serve as guide for those couples who want to avoid an unwanted pregnancy. Please check this chart HERE...
Posted by Frank B at 6:30 AM No comments:

Most women who have experienced both claim that it is easier
to have multiple G-spot orgasms than it is to have multiple
clitoral orgasms. If an orgasm rears its lovely head while
you two are playing, try whispering some words of encouragement
(and perhaps ratchet up the intensity just a little bit), but
basically continue pleasuring through her orgasm, afterwards,
and possibly into a next one.

As long as it still feels good for both of you, what's the
point of stopping? There is often a "pyramid effect" with
multiple G-spot orgasms; each one makes the next one feel
better, and makes almost anything else sexual feel better too.

However, as I said earlier everybody is a little different,
and quality is obviously more important than quantity.

By the way, in general it isn't a good idea to have a huge ego
/emotional stake in having (or "giving") orgasmsor multiple
orgasms; most sex educators believe it isn't helpful to get
"goal oriented" about something that's supposed to be fun.

I think there are two major problems women face that prevents

them from the immensely enjoyable experience of ejaculation.
They are the female's mental attitude, and their partners inability
or unwillingness to spend the time and effort during lovemaking and to learn the necessary techniques.

I will address both of these problems and the solutions here.
The ejaculation is done through the urethra.

This is the same tube that is used for urination.
It is located outside the vagina, between it and the clitoris.
The fluid is water like, and non- lubricating.

In no way does ejaculation improve the chances of conceiving,
it offers no lubrication, and is dumped outside of the vagina.
The only conceivable purpose of female ejaculation is for pleasure.

And the pleasure is intense, in many cases far surpassing the
best orgasm's. Often ejaculation takes place during both a
clitoral and a vaginal orgasm (yes there are two type of orgasms,
clitoral and vaginal, but often orgasm is a combination of the two),
giving the female extreme pleasure, sort of a triple whammy.

Sometimes after ejaculation the female will virtually pass out
from the intense feelings.

It can be argued that since the only reason that females can
and do ejaculate is for pleasure, then there should be no reason
for them to not do so, and as often as they please.

It is one of the safer sex acts, since in most cases it can be
triggered with fingers alone. Ejaculating from intercourse is
more difficult, especially when performed from the missionary
position, but still possible.

I am surfing the internet today and was surprised to know that there were a lot of babies being abandoned by their mother not only here in the Philippines but all over the world. What is alarming also is the fact that the search engine for the word 'abandoned babies' will give you a result of as much as 4,390 sites. These figures are for bing search engine results alone and not counting that of google and yahoo. And I am thinking that if we add all those numbers from the other search engine, the figures will reach as much as 10,000 or maybe 15,000 babies being abandoned worldwide. So, I am wondering now what could be the compelling reasons of those mothers to abandon their newborn babies? Remember, this is happening worldwide and I don't agree that poverty is the lone culprit or would be the common answer to the question. Therefore, what must be the reason for all of this?
See it for yourself here...
Posted by Frank B at 5:43 PM No comments:

Questions About the Penis

What's the average size of the penis? What are the extremes?
According to specialists, the average is 15cm and 90% are between 13 and 18cm.The records for a fully functional penis are 1.5cm and 30cm.

Can penis size be increased?

Yes. There are two surgical procedures to increase penis size-- the Bihari Procedure, and Fat Injection.

The Bihari Procedure consists of cutting the ligament that secures the base of the penis to the body. This gives between one-half and two inches of increased length to the penis; however, because the penis is no longer anchored to the body an erection no longer points 'up.'

Fat Injection is the process of removing fat from the backs of the thighs and injecting it into the body of the penis to make the penis thicker. Because the body rejects a significant portion of the injection this procedure may need to be repeated several times and each operation carries with it a severe risk of infection.

What is circumcision and why is it done?

Male circumcision is the surgical removal of the foreskin from the penis. When performed in a hospital, it is usually done shortly after birth by a doctor or midwife. Circumcisions are also given to Jewish boys by a mohel in a ceremony eight days after birth.
Some Islamic boys are circumcised when they are older, around age 12. The majority of American boys are circumcised.

Common reasons for circumcision include: better hygiene, "normal" or "better" appearance, and "his penis should look like his father's."

Common reasons against circumcision include: it is no longer necessary for hygienic reasons; it is a painful, barbaric practice; possibility of infection or surgical error; "normal" or "better" appearance; "his penis should look like his father's."; and "greater sensitivity of uncircumcised penis."

Question: How do I make my ejaculate more powerful regarding distance and quantity of semen?

Let's start with distance. First, the pelvic floor muscle plays an important part in the strength of your erections and ejaculatory control. To locate this muscle simply stop the flow of urine.

You will feel the muscle contracting at the base of your penis and across the pelvic floor, including your anus. Just as the first feelings of climax begin, completely tighten the pelvic floor muscles.

The automatic contractions of orgasm will inevitably begin and due to the pressure you are exerting with the sustained muscular tension, your load should shoot farther.

It makes the water stream shoot farther and harder. Second, increasing and prolonging your level of arousal can help to increase the amount of ejaculate you produce. Some of my most powerful ejaculations have occurred after a sustained period of high arousal.

Now for quantity. This depends on the individual, his age, and how long it's been since he's last ejaculated. Some guys come a little, some come a lot, and age has a lot to do with the amount of ejaculate.


Instead of saving up semen in order to spurt a bigger load, I'd suggest coming on a regular basis. Why focus on the quantity of semen? I'd pay more attention to the quality of your orgasms and the pleasure you get in sex with yourself and a your partners.